Crushes, are they called so as that's how you end up feeling?

So, I've been having trouble keeping up with my blog, I've already apologised about this but I have found a way to track my brain sick, while on the run, or should that be road - well whatever. I've found a new way to still bore you all sensless with my inane crap. Bad luck!
Below you will see how they will probably look from now on in. Except when I have an occasion near my computer, obviously!

The only down side with this type of blogging, is that you'll realise how bad I am at puncuation and grammar - god bless the auto correct, if only they could do it for proper English, rather than the crap American's claim is English. And could implant it in my brain. 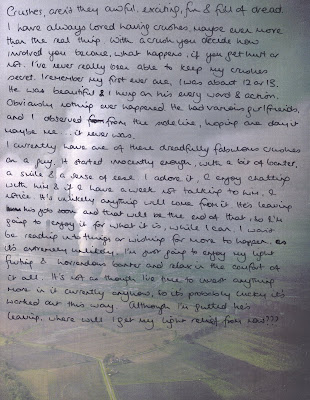 How time flies when you work...

I know I've been neglectful and don't deserve my blog. I have attempted to write a couple of blogs but I get halfway through and loose my track of thought, or my wind, or my effort, etc - I just get bored, I suppose these things happen when you do something for so long, after a while things get a little boring. Plus I've been extremely busy and don't have much time for myself at the moment, which kind of sucks but I'm coping.

Recently I've been having to relive my past. It's been very strange...way too many break ups going on in one place. Although for once I don't feel tired, fed up, angry, upset, fed up, annoyed, wound up, depressed, for once after having to relive what happened when I last broke up with someone (the almighty heart crippling break up), which was about two and a half years ago or so, I don't want to tear something shred to shred. I feel at peace with the past. Yeah I suppose it should have taken less time but when new things constantly crop up, raking up the past, it's hard to allow it to be left where it should be but for once and all, I'm at peace with the break up that broke my heart. Also, am extremely comfortable with being single, I actually forget at times that I am, which has happened since I was about 16. I suppose both things could be linked to the next thing (below), as when you have no time, you have no time to over think, which would make sense I suppose.

I've been working my arse off. By the end of this month, I will have worked a total of 255 hours. On average about 53 hours a week. It doesn't sound like much to some of my friends and to others it sounds like hell. But I'm coping. It was hard in the first week, 4 nights at the pub, 5 days at work but now it's just what I do. And it's what I'll be doing or another year, although after June, I may lessen my hours or rearrange them slightly, so I can rest more during the week. But it's been fun and I feel like I'm actually working towards paying off my debt. Although right now, most of it has gone to the utility companies, which sucks!

Plus, is it just me or are others also tired with having to constantly ignore friends requests (on facebook) from people they went to school with, whom they have no interest in. Constantly I get requests from people whom I hardly spoke to at school, let alone gave a shit about and now they constantly try to add me, surely they get the idea?!
My friends are: people who I know relatively well or had a very good laugh with once or twice, people I see regularly, people who mean something to me, people who are just too good to pass up the chance to not be friends with or to spy on.
Not people who I met once and never spoke to again, or people who I once went to school with 10 years ago and haven't seen since and if I did, I would most probably ignore.
Posted by Pipsywoo at 4:21 PM No comments: