I love love love Kristen Schaal, she's 100% amazing! If I was gay "hell yes"! Ever since I first saw her as Mel in "Flight of the Conchords", I've adored her. She's funny, intelligent and oh so adorably cute!

Here is a rather entertaining moment of her on "The Daily Show with John Stewart"!
Posted by Pipsywoo at 1:15 PM No comments:

Thoroughly enjoying her current project
Posted by Pipsywoo at 2:08 PM No comments:

An open letter to Hollywood...

Unless you have a magnificent computer generated film with a shit storyline, or an action packed film. There is no need to use 3D! I know it's all the rage at the moment and you can charge an extra £4 per ticket at the cinema, and make your film less interesting story wise, but it doesn't mean you can abuse this effect. Certain films are better with it and without it, pretty rubbish. Others have their own merits and should just stick to good old classic, silver screen style film making!

Kind regards
Pipsywoo
Posted by Pipsywoo at 12:19 PM No comments: 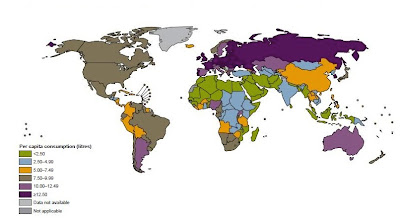 Here's a map of the drunkest countries. I like to think that I'm helping Britain stay dark purple!
Posted by Pipsywoo at 5:49 PM No comments:

I do apologise if I've written about him before, I've spoken for years about my theory but am pretty sure I haven't actually written about it:

I've had a theory about Tom Waits for a while, not only is he awesome but any film he cameos in, will inevitably be awesome too.
He is the golden seal of, not only creditability, but also a certain fantastic level of "Indie", which no one else can do. I've started to watch films due to his cameo only and every time I'm more than pleased.

There is only one film on his imdb list that I'm unsure about "Domino", but I think my apprehension is the idea of Keira Knightley playing a bounty hunter?! Which I'm pretty sure most people would agree is a little hard to comprehend.

A mini list of Mr Waits' cameos:
Mystery Men,
Wristcutters: A Love Story,
The Fisher King,
The Outsiders,
Dracula,
Coffee & Cigarettes...and the list can go on and on and on...

I've got lots of him on my iPod and I've been meaning to get to grips with him more than I have, I've listened too and enjoyed "The Bone Machine", but that's it really.
Here's to my listening to his back catalogue and his future cameos. I salute you Mr Waits!

If anyone has any suggestions, please feel free to tell me...

- Posted from the pit of despair

"Sorry" it's a simple word. A simple five letter word. That to some means very little, but to most means a lot.
I learnt quite early on to not be flippant with this word, otherwise when you really mean it, no one will believe you. It was a relatively valuable lesson. Due to that lesson, it's now a relatively important word to me also.

I think it's such a shame that there are people in this word who still haven't learnt the value of this word. Saying "sorry" doesn't make you weak, or make you responsible for a situation you're not comfortable with. It generally makes you stronger, and means you value the person you say it to, or at least you value their feelings. I know one person in particular who has spent most of their life throwing this word around and has never really meant it and now, the one time it would have been nice to hear it, it's no where in sight. I guess they haven't learnt the lesson yet, which is a shame.

Also, isn't it weird how there is a time limit that comes with "sorry". It's so bizarre that if you haven't heard it within a certain time of when you'd hope you might, you start to give up on that friend entirely. Who would have thought a five letter word could represent so much?
Posted by Pipsywoo at 11:36 AM No comments:

I've my fingers crossed for these for my birthday, as well as an exciting 500gb back up drive for my computer (life sometimes is far too exciting) and Lost Season 6.
Posted by Pipsywoo at 8:43 PM No comments: