I'm not dead, I've been busy creating, not massive amounts but enough to keep a girl's hands from being still. I've made 40 metres of yellow and black bunting for my friend's wedding and have made numerous little things for friends but all the while, I've been crocheting granny square baby blankets: 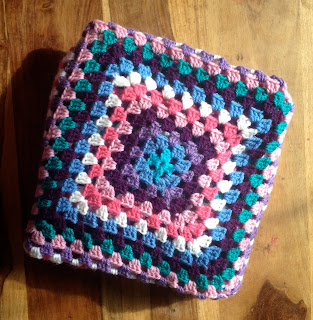 Everyone I know is having babies, it's crazy and I keep on making presents for both boys and girls and they are always boys. I now have an abundance of girl presents, so luckily, I'm predicting that my friend, Jo, has a daughter, within the next year or so and she is going to be oh so spoilt with gifts. YAY! Or a boy who has a lot of pink gifts?! 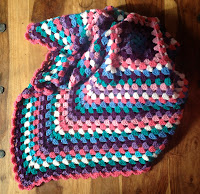 These photos show my first completed blanket of 2013, it's a collection of soft baby acrylics, I'd love to make a blanket out of stunningly soft cashmere, but it's not practical, as most babies vomit, poo, dribble a lot, and therefore the blankets need to be thrown in the washing machine and dried in the tumble dryer with all of the other clothing, instead of being hand washed and dried flat rolled in a towel and placed in the airing cupboard ... actually, I wouldn't be surprised if I found a hand washed cashmere baby blanket rolled in a towel, that has been drying for 3o years, in my mum's airing cupboard ... lets be fair, during the first years of most babies lives, the mother is not of Earth, let alone giving a shit about the washing. My friends can thank my thoughtful nature of ease of washing by paying me in kind, failing that, cash or wine is always accepted! 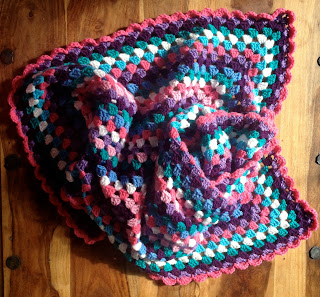 Anyhow, I'm extremely proud of my first blanket of 2013, which I completed with a scallop edge.
Below are the other three blankets I've been crocheting. For two of them, I'm awaiting a parcel of cheap wool from the mother dearest, who was kind enough to pop to my old wool shop, Masons, in the country and pick up some balls on my behalf! Curse stupid London and it's expensive wool shops! 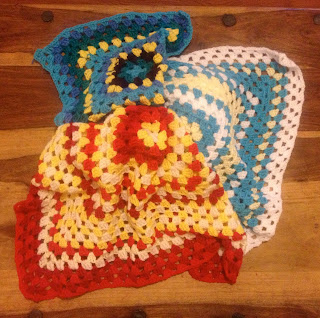 My Year in Books: Great Expectations

I love Great Expectations! I love Charles Dickens! I want to live in Little Britain, London and visit Hammersmith, as though it is the village it once was and talk to Herbert, etc.

For a while, when Pip had been told he was going to London to become a Gentleman, he got a little above his station and was rather rude to Biddy and derogatory to Joe but I feel that for now, I can forgive him these, as he seems rather charming at the moment. I'm only up to the point where he goes to Mr Wemmick's for dinner in Walworth.

I also, love that I'm learning about London, while reading it, it's positively charming to learn about the olde days!

I've just gotten back from my first ever trip to Scotland, aged 31. Which seems rather odd, bearing in mind that I've gone to New Zealand, in fact I've visited all of the countries in the United Kingdom, apart from Scotland - all very circumstantial, I swear.

Any how, I was dragged to Scotland due to my best/oldest friend in the world, getting married there and no, neither the bride or groom are Scottish and no, neither of them have truly Scottish roots, it's all due to Edinburgh being their first weekend break as a couple.

The entire wedding preparation and day was incredible and a lot of fun! I was honoured to be a part of the wedding party and loved every second of the entire thing. I wish them both all the bestest in the world, with me right by their sides like a parasitic twin!

After the awesome wedding, cocktail drinks in to the late hours and a long, heavy, hangover, I found myself next to Loch Tay. Which is rather marvellous and beautiful.

Tom and I spent the weekend in the company of a most hospitable family: The Hickmans, who are friends of Tom's family, and Katie, all of whom are extremely warm and welcoming people, they assisted me in seeing more of Scotland, than I could have hoped too, or even have planned too.

Loch Tay is where the River Tay runs to and through, it's long and thin but very pretty, I was told by the Scottish people I met, that I'm not allowed to recommend anyone goes to Scotland, let alone Loch Tay. So all I'm going to say, is that Loch Tay is crap, as is Scotland, don't bother going there, at all. There is nothing to see or experience, honest?!

We spent the weekend being accompanied by the most darling springer spaniel, Rum, who refused to sit still long enough to have her photo taken, hence the fragmented image below...

In all seriousness, Scotland is truly beautiful and lovely and a place I'd love to go back to soon. Why did it take me so long to get there?
Posted by Pipsywoo at 7:52 PM No comments: