It's Oh So Quiet

Normally when I go quiet on here for a while, it's for a couple of reasons: I've started a relationship with someone and I've no time to brush my teeth, let alone think about writing something, or I'm content! Recently it's been the latter. I had a glitch, I got a little blue and felt rather alone and then I got over it, picked my self up and dusted myself off. Am now so ridiculously happy and content, it's scary. (Other than my little over dramatical outburst related to money last week, that is).

When I'm content I've not the energy to write my rants down, due to being to blissed out. I do rant (don't get me wrong) but it's all verbal, like most of my brain sick. So here are a few rosy sentences about stuff...

My house currently has about two gallons of jelly in it. Chips' girlfriend (The divine Miss Katie) finally called him on his quote of "if someone gave me a vat of jelly, I'd have to put my face in it", well it was his birthday. It took two manly men to carry it in to our house and three weedy girls to struggle it in to my car. It's amazing. Tastes so good and looks incredible. It's just, other than jelly wrestling, what do you do with gallons of jelly with fruit in it?
My job at the party was decorating committee. We borrowed a gazebo from Mr Mole, hooked up fairy lights inside it, placed tea cup candles everywhere and pulled part of the sofa outside to sit in it. It seemed rather popular with the guests. We also changed the photos in our toilet around, so Chips featured in all of them, this made most guests laugh. But did make one guest vom in our sink, which is the littlest sink in the world! Brilliant night all in all though, Chips felt like a king and everyone had fun. We partied for a good 13 hours and drank the entire fridge of booze.

People truly amaze me. On Monday I was sat in rush hour traffic at some lights. We sat there for about 5-10 minutes and I finally decided to go the long way home, I hate sitting in traffic. I got in the other lane and realised that a lady had broken down at the lights and was unable to move, her hazard lights weren't working either. So I did what I'd expect someone to have already done, I pulled over and asked if she needed any help. She said she'd called someone and they'd be there in an hour. So I suggested that we pushed her car on to the kerb, therefore allowing the traffic to flow.
She looked pretty puzzled by this. I explained that if we had a couple other people help us, we could push it while she steered. At which point a nice man, tattooed from head to foot, offered help, as did the man in the car behind her. We succeeded and the traffic continued to flow. I thanked the men and carried on my way. Why oh why it took 10 minutes and me to ask, is beyond me, what if she didn't have a phone or was having some form of medical issue?

I was told the other day that when the next monarch comes in to power, that the head on the coins will change direction. Yet the notes and stamps will stay the same, facing to the left. At which point does the Mint start printing the new coins? Do they keep constantly updated profile cuts of the next monarch on file (I mean, the next monarch is going to be incredible busy around the time of their parents death and their own coronation etc). What happens if the next monarch doesn't want to face left?

The other day I received a package from a friend in LA who works for a material company. She had sent me some cuts of the material I'd asked for. This made my day and week, as it was just after my extremely theatrical outburst.
Simone made my whole week in fact. I've been pondering about what to make with them and I think I've finally decided. 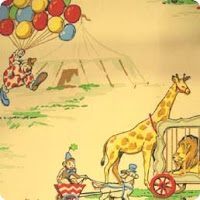 There is this awesome circus material and I originally thought kitchen curtains would be genius but have since decided that a cropped jacket, is the way to go. Am now on the hunt for the perfect pattern. It'll be so so adorable.
Still completely unsure what to make with the rest of them though?
On another note, Simone is Australian but lives in LA and has never heard of, or tasted Salad Cream - I shall rectify this on her next visit to Blighty.

On a similar note of sewing, I used my overlocker yesterday and made adorable English bunting out of numerous pink/flowery materials. I've also ordered some cushion inserts to make some huge cushions. All these things are going towards Nina's birthday party. Which is my next decorating committee project.
Posted by Pipsywoo at 10:48 AM

Gosh, have you already ASKED me about salad cream? It sounds like other dodgy British foods like Yorkshire pudding and spotted dick. As long as there are no dead animals in it, I'm willing to try it!