My Year of Books: Various

I've read various books since I last updated. To Kill a Mockingbird by Harper Lee, Five Quarters of the Orange by Joanne Harris and Pride and Prejudice and Zombies by Quirk Books.

To Kill a Mockingbird was incredible. I saw the film when I was a teenager and remember enjoying it but I had never read the book until now and I'm now wondering what took me so bloody long. It is a wonderful read, which sums up the relationship between the adult and child worlds, the conceptions of both worlds from the opposite points of view and also captures that period of time in Alabama and the racial tensions which existed.
I may have shed a few tears and also gasped aloud on the tube ride to work in the morning but it was the kind of book which I got incredibly wrapped up in and wanted to carry on all the way to Brixton, so I could continue reading it, rather than go to work.

Five Quarters of the Orange, isn't exactly a classic work but I wanted something slightly lighter to read and my housemate suggested this. It wasn't really a light read but it was a very good one. Although, I'm not exactly sure that I had the right amount of compassion for the main antagonist.

I'm currently reading Pride and Prejudice and Zombies, which is Pride and Prejudice rewritten to incorporate zombies (one of my favourite topics). I wasn't 100% convinced that it would work well but it does exceedingly. It has been both entertaining and well considered, as well and kept to the original storyline without detracting. My only criticism is that the cover makes the average person give me a raised eye brow, when read in public spaces... 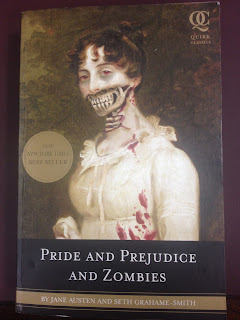