A Baptist Funeral for an Atheist

Rowan and I had hoped to go away for Christmas, my parents would ideally cancel Christmas and hide away reading endless books, completing crosswords and eating Chocolate. Rowan's Mum was planning on spending Christmas with her parents as her Father hadn't been well recently, unfortunately her Father passed away at the end of November. Robin was a bit of a legend, Rowan and he pen pal'd while Rowan was living in Hong Kong and had gotten to know him well, this is Rowan's eulogy for his Grandpa: 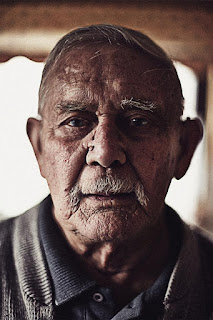 Such a fantastic story, this old adventurer finally passed. Darjeeling narrow gauge railways through the base of the Himalayas.. That was just to get to school! He got strafed by a zero fighter while running along a runway in Burma. He had close call with the Japanese navy as he manned a 40mm canon on escort carrier HMS smiter. He blew up a Japanese monument in Hong Kong. He carried on blowing stuff up as his regular job. He faked his age so many times he forgot how old he was. He gambled and won; (He probably knew what the horse had for breakfast) He spent his grandkid's inheritance on holidays and cruises (legend) he was a shopkeeper, a centre of community, a most aggressive driver, and my mother's father. Our much loved, and missed, legend Robin Sinclair D'Ortez sadly taken from us yesterday.

The funeral was held in Tenby at the start of December, a simple affair at the local crematorium with friends and family, his daughter's local preacher said a few kind words, followed by some food at a beautiful Baptist church in Tenby.

Rowan and I spent Christmas with his Mother, we visited the local butchers on Christmas Eve and I have to hand it to Gorseinon, they have a healthy, strong town centre with a variety of wonderful shops, bespoke and traditional; some thing unheard of within commuterville (the M25 and surrounding counties), which I've always felt is a huge shame.
We got to play 'Cards against Humanity' on Christmas Eve with friends; you know you're friends are dark when they state 'when does this game become offensive', half way through playing. Our Beef Wellington could do with some work, but it was a very nice lunch and we've plenty of years to perfect it! We spent a couple of days with my family en route home, attending the local pub in the village and winning the pub quiz for the first time ever!

A pretty good Christmas all in all!