Rowan and I haven't been on holiday since our EPIC French camping trip to the South of France. You may all remember it from our numerous miserable holiday snaps - contrary to popular beliefs we actually have an incredible time then.

We decided to grab the BA Black Friday flights by the balls and booked flights to Salzburg. Ro has wanted to go back to Berchtesgaden since he visited there back in 2010, and this was the perfect chance. I've never been to Austria or Germany, so was far too excited about everything. I bought a phrasebook eight weeks in advance and started to host 'German word of the Day' at the office.

Anyhow, on with our holiday...we set off at 4am to Victoria Coach Station, to catch a 7am flight from Gatwick, I had never been there before so was terribly excited, of course. It's the little things...
Once at Gatwick, we did a little shopping and headed to our flight, we had to miss the compulsory Airport Pint, shocking behaviour, but I'm glad to report that Gatwick North has a Weatherspoon, just like every Airport in Britain. We did however have our breakfast booze on the flight, we and a guy behind us made the Air Stewarts open the bar at 8am, oh well we were on holiday.

Once landed in Salzburg, we were greeted by snow capped mountains. Off the plane we got and on to the bus to town we got. Due to arriving early we had to pitch up in a pub opposite the Train Station, upon entering the pub we were greeted by a 'Smoking Bar' and a pint...and...relax! Smoking Bars were a random experience, it's been years since I've been subjected to smoke and beer in a public place. Once checked in to our lovely hotel, Hotel Hohenstauffen, (highly recommended), it was friendly, warm and had wonderful 80s decoration, a flowery wallpaper; the four poster bed had flowery wallpaper on the top of the bed, it matched perfectly.


After our nap, we headed into town to have a potter, I got us lost of course by insisting that I knew best, however I didn't and then I was in a grump due to it. After a little walk around, Salzburg is very pretty, we headed to an Austrian themed restaurant and headed home for an early night. 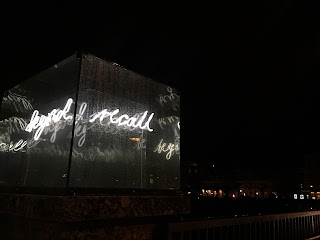 On our first full day in Salzburg, we walked up to Kapuzinerburg. At 11.58 lots of sirens started going off, we concluded that we were about to be bombed, followed immediately by midday church chimes. We concluded that Salzburg celebrated in true style everyday midday! Shortly before this Rowan insisted that I never question him again, do what he suggests, go where he suggests and do EXACTLY as I say. Oh, it's like that is it...BLOODY MEN!!!


We ended our first full day in an Irish bar, drinking and being merry. Ro decided that we should go for dinner in a traditional restaurant, although I was shitfaced at this point and felt particularly ill halfway through, not a high point...in fact, a terrible low point!

The next day I felt dreadful to say the least. We had to pack up and head to Germany, it's always great to travel while hungover, isn't it?! After a train ride we arrived in Berchtesgaden, Germany! We were staying with Simon, via Air BnB. The apartment was large, airy and had enough space for 6 to share easily. Simon was warm and friendly with great local advice and a dry British humour.
We popped to the local supermarket for some provisions and booze and propped ourselves up on the balcony with some rotwein to watch the world go by...we eventually headed into town and ate some delicious Italian food, heading back to our spacious pad for an early night! 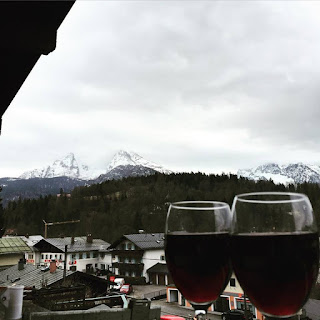 Ro fell asleep before me, as always and jumped so high in his sleep, it startled me and made me laugh...

We had planned while in Berchtesgaden to head up to Kehlsteinhaus and to Konigssee. However, The Eagle's Nest is shut during Winter and the ferries at Konigssee only run half of the lake, to St Bartholomew. So instead we walked along the Konigseer Ache to Konigssee. Along the Konigseer Ache there are plenty of biergartens and according to a local, they don't mind if you eat picnics in their gardens, which I look forward to doing one day.

Once at Konigsee, we awaited our ferry and once on, you get to see sights like the below. Isn't it glorious!

Once at St Bartholomew, we enjoyed the view and four 1 litre steins, much to the bartenders surprise and took in the breath taking views!

We caught the last ferry home and decided on one more drink before we headed back, we missed the bus and had to ask McDonalds employees to call us a taxi. Everyone in and around Berchtsgaden were so friendly and accommodating. It's all so nice and I look forward to going back very soon...with friends. Once back near our pad, we popped into the new bar at the railway station (apparently once Hitler's private waiting room) and enjoyed a pint and the distance sound of bowling pins skittle across the shiny floorboards above.

The next day we needed some RnR, so headed to the Spa, had massages and floated around in the salt baths. Being able to eat and drink booze by the pool side felt strange but nice. Afterwards, we set off back to Salzburg, realising that the bus is much quicker than the train, so off we popped. We went through some lovely looking towns / villages and found our way to our new hotel, Hotel Amadeus. This type of hotel isn't quite our cup of tea but we really enjoyed staying there and the rooms were large and welcoming. The hotel runs an honesty bar at night which was refreshing and far too easily accessible - as we discovered later on that evening! They also had The Sound of Music accessible on the TV, however it was in German, which I clocked as soon as Faux-Maria started singing... 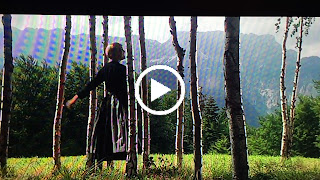 Also that evening we ate delicious Sushi at Nagano, it was a-ok! Where we received fortune cookies, Rowan's was empty :( , mine said: 'Du nimmst ohne zu zogern jedes noch so schwere Problem in Angriff', translated to: 'You take without hesitation even the most serious problem in attack'.

SNOW!!! Only a little snow but snow still, it's been decades since we've seen snow! It was so exciting, although it didn't settle! BBC Europe has constant re-runs of terrible TV shows, Blackadder and a TV show by Julia Davis, which I hope to watch at a later date.
Rowan bought an awesome hat (and was mistaken for a German) and we then discovered the stairs up to the Fortress, it was a hard climb but we bloody did it and were glad we did. Once up and in the Fortress, we enjoyed the view, the history, the tour and the marionette puppet exhibition.


Our last night in Salzburg was spent eating Japanese, I really fancied a Ramen and was heavily let down by it: £18 for Seafood Ramen. Seafood = a piece of cod, three medium size prawns and some mussels, plus the vegetables included in the soup were of the frozen variety, very disappointing. Ro's sushi was ok, although he felt that some of his rolls had been kept chilled, instead of freshly made. A very different experience from the night before. However, we wouldn't let that dampen our holiday, it was blinking brilliant. We had a super time and for my first experience of both Germany and Austria were wonderful. I can't wait to go back...
Posted by Pipsywoo at 9:47 PM