I just had to pop to Sainsbury's a short while ago and I had to buy two random items.
I was hoping that there would be a witty comment or a pun or a general one liner from the cashier but nothing, god damn, not even a knowing look. When did these people learn not to pry?! Since when did these people have respect to not comment. I remember being one of these people and I was rarely respectable or considerate...hell no, it's no fun. Sat on a cashier for 8 hours, in two 4 hour breaks, with 15 minute breaks in both halves. It's godly boring, quips, puns, one liners, witty remarks, smart arse comments and knowing looks are all I had to save me from going crazy.
I mean if someone had bought a pack of condoms and a cucumber at the same time, a knowing smile would be demanded, at least. So why not when someone buys the below products!!! Bloody Sainsbury's did a better job at removing their cashier's personalities, than Waitrose ever did!

On an upside, look how pretty the power station looked this morning, a beautiful archway over the poetic cooling towers. Oh so pretty. 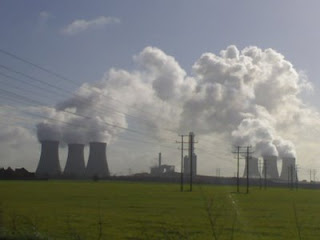 Thanks Lukarse, I thought it was pretty too...like a steam arbour over the station.
Gosh, I love that building.