While in Geneva, during the small period of time when my nose wasn't stuck in the direction of my phone and emails, I happened across these wonderful buildings... 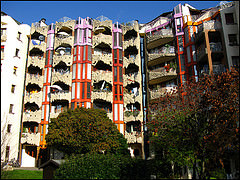 ...which is a very Gaudi-esque style building. It is rather striking compared to the traditional Swiss architecture and has been stuck in my mind ever since. Aren't they rather wonderful. There isn't much online about them online, which is a shame. 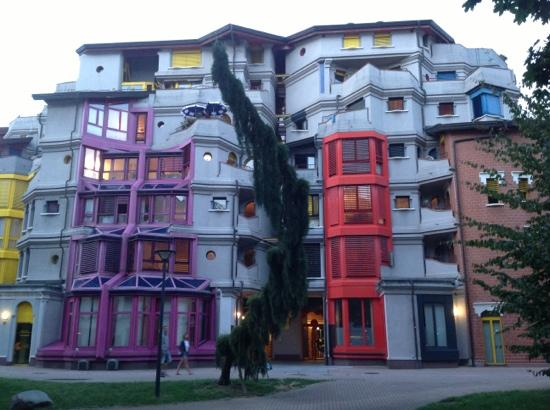 They are called Les Schtroumph Buildings, and the tourism website says the following about them:

The fantasy world of the Smurfs recreated in extravagantly curved dwellings.These incredibly shaped and strangely coloured buildings behind the railway station never fail to surprise. Welcome to the world of the Smurfs!
You'll find this strange housing complex with curved walls and surprising colours in the lively Grottes district behind the railway station. Three architects planned and built these residences between1982 and 1984, inspired by the Spanish artist Gaudi. There are reliefed balconies, wrought iron railings and… not a single straight line. The comparison between these buildings and the many-faceted, multicoloured mushroom houses of the blue comic strip characters could not be denied. No wonder the housing complex is now called ’The Smurfs’!
Posted by Pipsywoo at 11:45 PM