I woke up super early the first morning, had I expected anything else?! Not really. I lie in bed, trying to numb my brain with TV - fail. Eventually I get up and take a walk. I find adverts for free dog poo, I'm so glad to see these issues are universal and it isn't only shitty Chelsea and Mayfair, where people make the effort to bag their dog poo and then leave the bag on the pavement.

I ended up walking to the Beverly Hill Mall (much to the hotel receptionist shock, apparently people in Los Angeles do not walk), it was shut until 10am. Everything is shut until 10am. I popped into the local 24hr pharmacy, which was actually a large corner shop with a specialist pharmacy area. The rest of our day was full of pre-production meetings and fittings for the shoot. 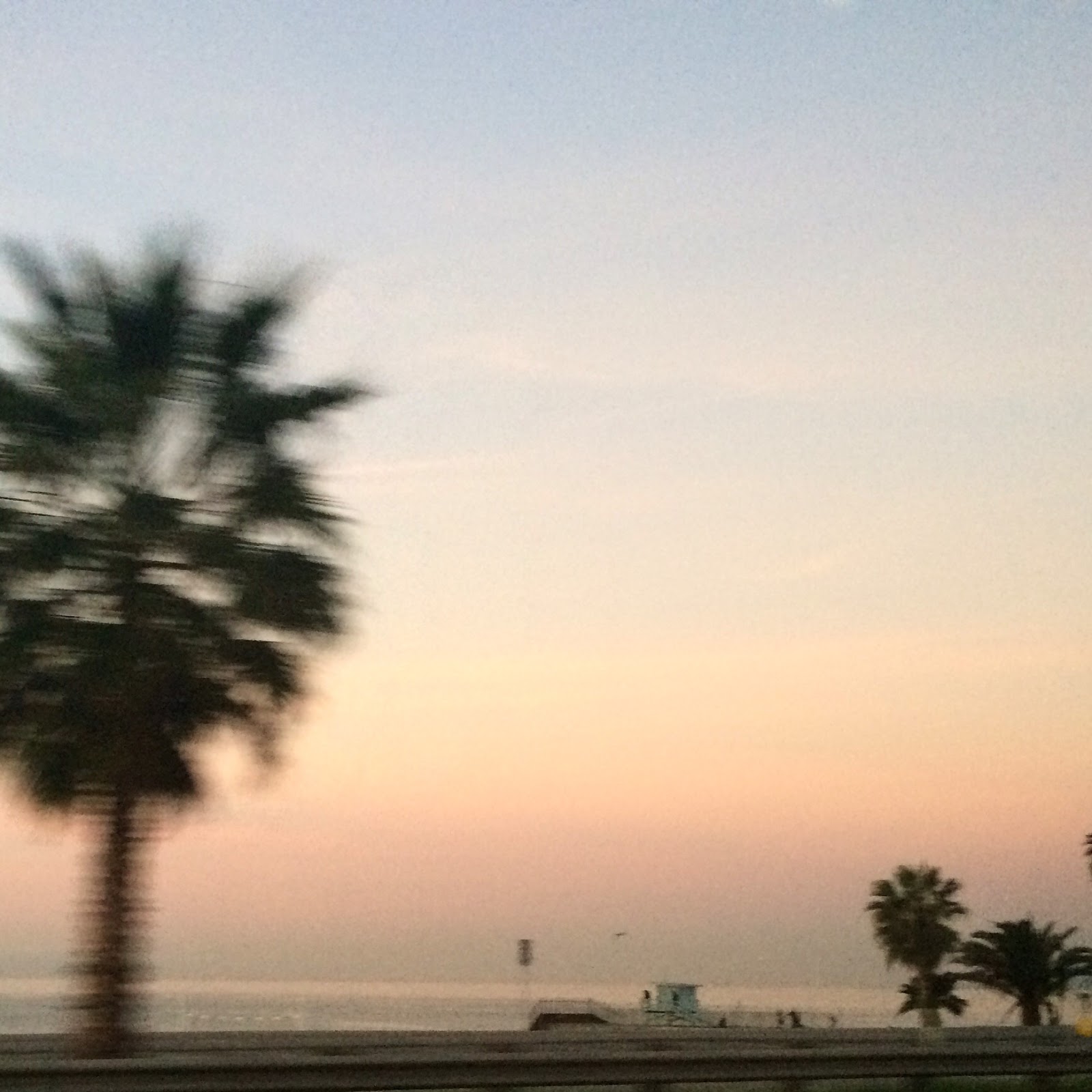 The first day of shooting was executed in an amazing Malibu beach front mansion, that had the steepest drive known to man. The house was apparently used previously in 'Entourage'. The shoot included flowers being dangled with invisible fishing wire and created beautiful backdrops like this. 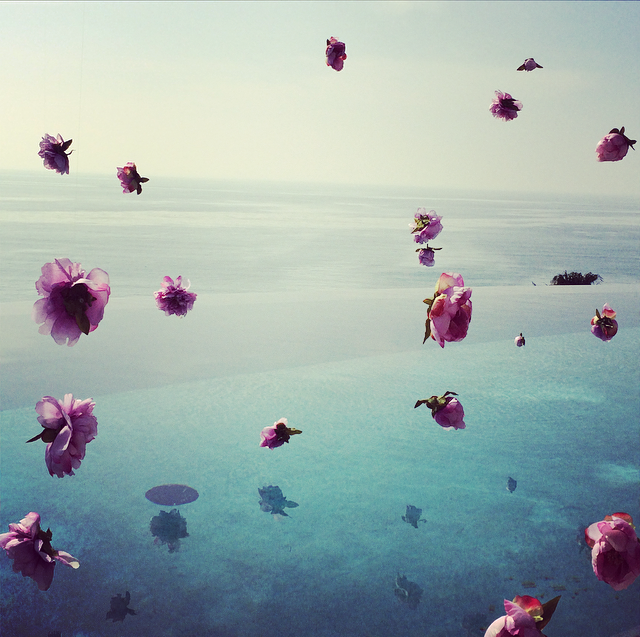 We had a male model on the first day and the poor guy hung around all day, to have his ear feature in the final photo. Below you will find the true glamour of photoshoots: Fake props and the 30 people surrounding the models in a "romantic" moment! 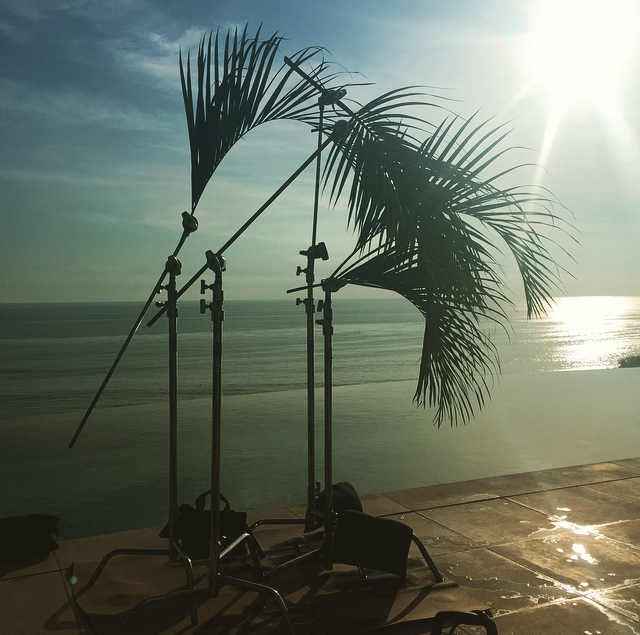 That night I enjoyed a nightly swim post shoot. Everyone thought I was mad, it was only 12 degrees but it was glorious!

Each day was gruelling, long days, starting on average of 6am, finishing at either 6pm or some nights 9pm. Everyone tried to keep their spirits up though...dark chocolate was the snack of the day, due to the model I was with having a secret obsession with it.

I got to see Simone again midweek, we hit a very nice Mexican, where the hostess did what they do in the films, seat you at the bar and collect you once your table is ready - yay! I also got to see The Viper Rooms, The Roxy and some other landmarks. I still hadn't seen the Hollywood sign though, even though I'd been up in the hills, etc.

The second days shooting was at a famous Beverly Hills home, known as The Sheats / Goldstein Residence (it was designed by John Lautner, an apprentice of Frank Lloyd Wright). It features in 'The Big Lewbowski, as Jackie Treehorn's home. It was pretty cool, although everything was concrete and it had lots of sheer drops everywhere, my vertigo wasn't overly happy. Plus, it was the wrong day to wear high heeled boots - two locations involved walking down steep hills. It had lots of hidden gardens and holes to hide in. Plus some huge Koi. 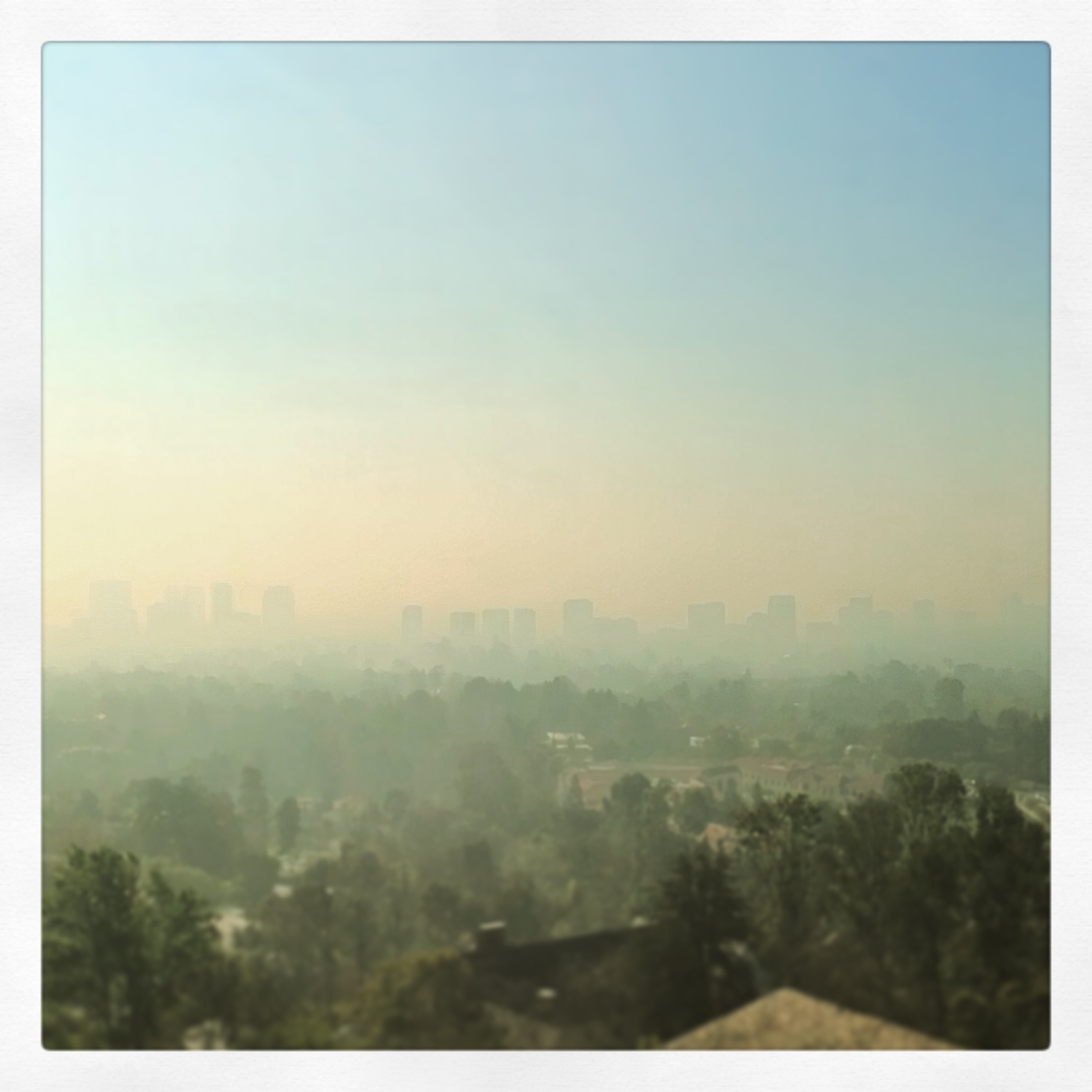 The view from the edge of the pool was incredible, however you would not take children to this house. Apparently, only one person has fallen from the walkway in the current owners term, I'm not sure if I believe that, if the photos located everywhere were anything to go by. 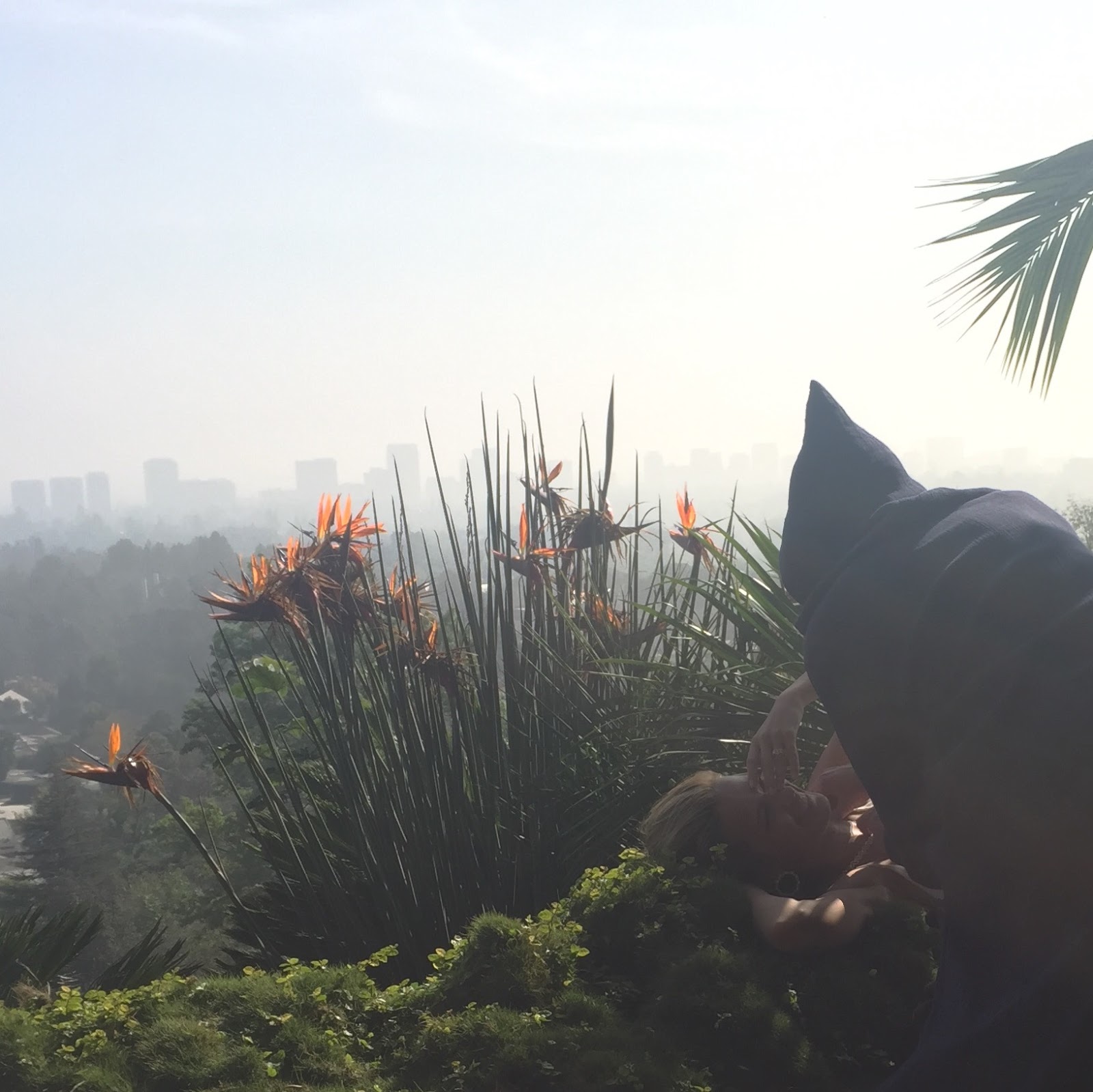 Above is the stylist checking that everything was ok, wardrobe wise, however I think it looks like the grim reaper visiting.

On Thursday, was the last day of shooting. We were based up Mulholland Drive in a car park initially and then moved to a beautiful park which was hidden at the base of Mulholland Drive, if the people who lived there knew such a beautiful park was hidden, they'd be swimming in the lake every weekend. Or maybe that is frowned upon?! The weather was beautiful and the scenery glorious!: luscious, green, gorgeous!

Friday morning saw me packing up and heading out to Sunset Blvd to see the Stars! I had one intention, finding Danny Devito. I walked up the wrong side of the road and completely missed him, especially after Simone had been kind enough to tell me where he was lurking. I did, however find him! 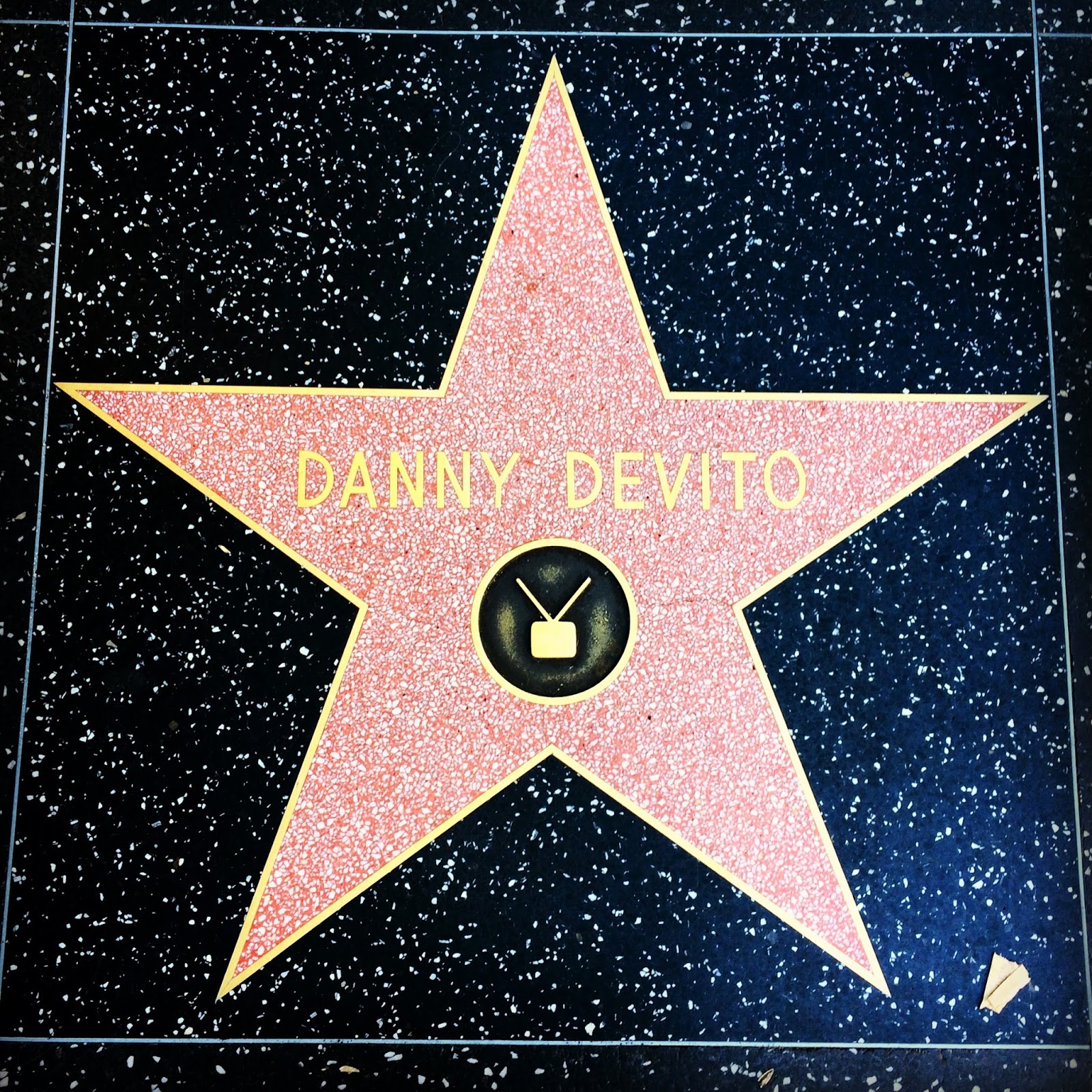 I found Peter Falk "just one more thing" for Rowan too! 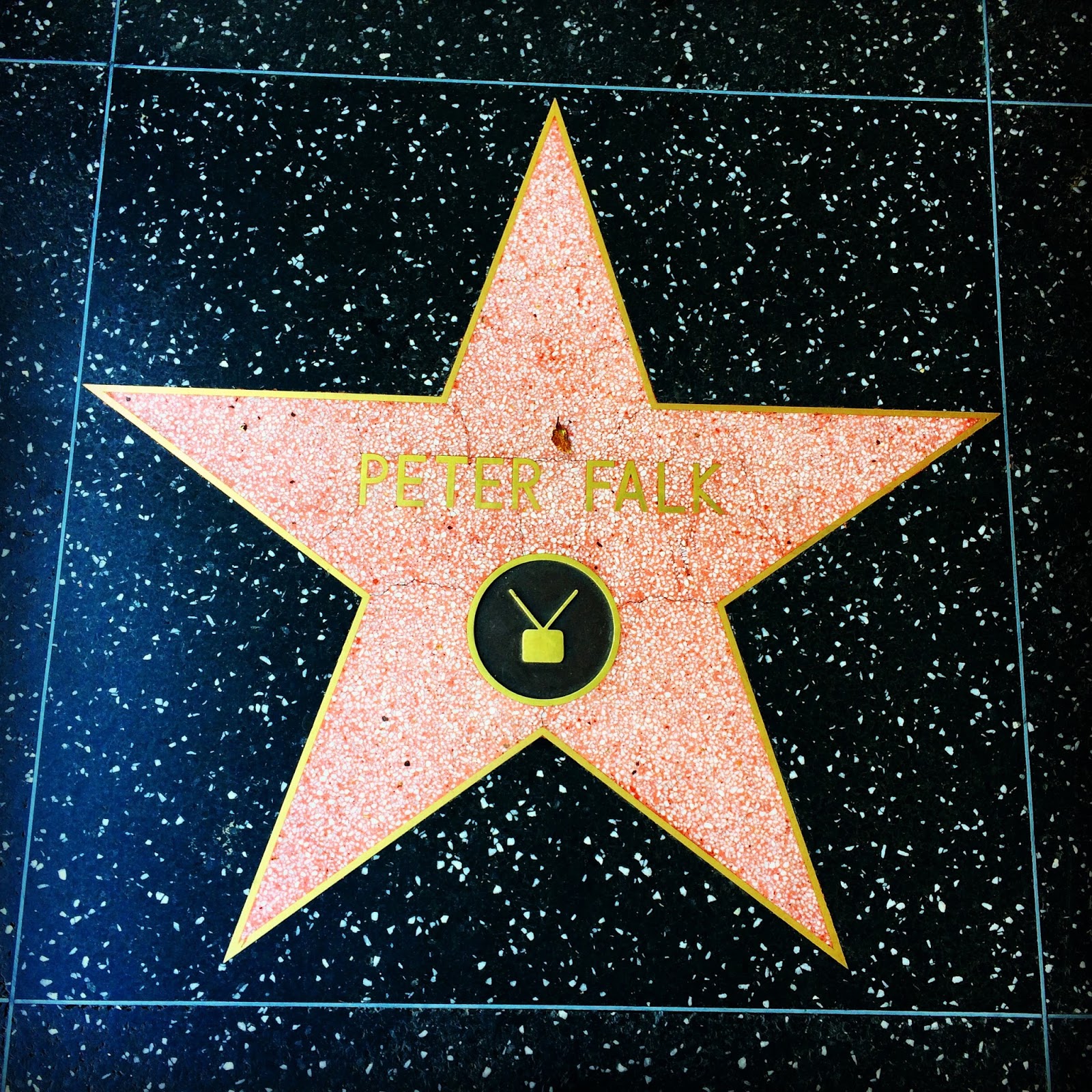 After this, Simone picked me up, we collected the gorgeous Quincy from her home and headed up to the Observatory and guess what I finally found:

Yep, the Hollywood sign! Woo Hoo! So up here is featured in 'Yes Man' and 'Rebel Without a Cause'. I'm still yet to watch 'RWaC', I promised Simone I would and I still haven't. I've owned it for years and fail to ever watch it, it isn't ok or acceptable. I will watch it by the end of the year, that is my one promise!

Here is the view from the front of the Observatory:

Eventually I packed my bags and headed off to LAX. Surprisingly, as always, I had forgotten to buy any sweets or presents, other that an 'I love LA' magnet for me and a 'Best Boyfriend' award for Rowan. I had also failed to post my postcards, I'm crap some days, what can I say. This saw my getting ripped off at the airport and buying over priced sweets. I also never saw a twinky, not even once while I was in LA. I've come to the conclusion that they don't actually exist!
Posted by Pipsywoo at 8:21 PM