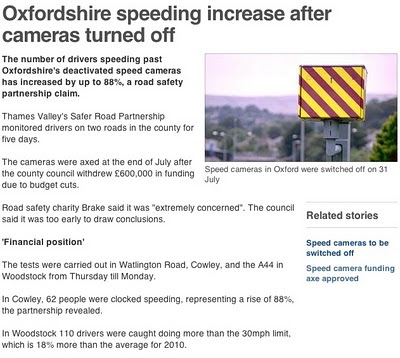 The council in Oxford decided to save some money, so have switched off the speed cameras within the county of Oxfordshire.
There has been some hoo ha about the matter. Mostly, that as soon as they were switched off, everyone would be driving at 100mph everywhere and would be unable to stick to the speed limit, because obviously it's the cameras in fixed positions that make us all adhere to the speed limit, not that fact that it's law or anything.
These sorts of comments really annoyed me, as the speed cameras purely make people who speed, adhere to the speed limit for that 20 feet. If they speed, they'll continue to do so regardless of cameras. Some times they'll get caught and other times they won't.
What irritates me about the survey above, is that you know it was taken with 0% tolerance, when the average speed camera is set at 10% plus 3, which equals speeding at 36mph or above, in a 30mph zone. I imagine that the average speed camera set at 0% tolerance, would also get rather a high rate of speeders too. It's near impossible to drive at 30mph all of the time, regardless of cameras or not.

I hate modern exaggerated, over reactionary media reports. They are such bullshit!
Posted by Pipsywoo at 10:59 AM