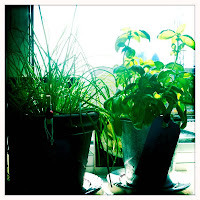 Since moving in to the flat, I've found that I own a lot of random bits and bobs which are perfect for a house, they just sucked when I only had a room and one cupboard in a kitchen. After getting bored of unpacking on the third day after moving in, I got bored, so threw a couple of baskets of stuff under the bed. Major mistake, as most of it could go in the kitchen: candle holders, jars, fairy lights, cups and saucers, bunting, need I go on... 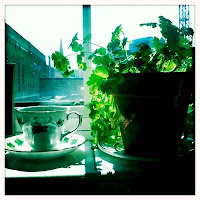 Anyhow, I've always failed at growing things, house plants, herbs, vegetables, if it needs help to grow, I've killed it!
But, I now have a south facing window, that gets a lot of light and thanks to my grandma, a pile of terracotta pots. I cheated by buying pre-potted herbs from Sainsburys and repotted them. Within 2 weeks, they were all still alive, thriving even, and I've had to repot the Basil due to it being huge! The only one which is suffering is the Coriander, I'm at a loss! Must do some research. 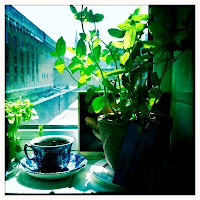 When walking past the Bishopgate Kitchen the other day, they handed me what I thought were matches but in fact were herb seeds. Well. Instantly I got excited, I've kept pre-potted herbs alive (bar the Coriander, which is technically alive but not happy), how hard can it be to grow from scratch! I've filled two teacups with some soil and am going to have a go at growing Thyme and Sage! I'll keep you up to date!
Posted by Pipsywoo at 1:08 PM