Tom and I had a go at making one of these last night.

We took their advice but I made a few adjustments and have some personal advice.

Right, as you might all know, if you mix water and cornflour together, it becomes a compound, where as, if you mix the water and glue together and then introduce the cornflour, it turns to a crazy ultra strength glue mixture.

It's best to do this on a hard floor, or outside in a dry area. My flat has hard floors but we stupidly set it up in the middle of our sitting room, and then had to limbo every time we walked in. So think carefully before you set up.

Suspend some wool or doweling rod (if you're lucky to have one), across an area, and place the towel or tarpaulin under it. Blow up the balloon and suspend from the line/rod.
We found that we needed two of us, as one of us spent most of the time holding the balloon in place when placing the gluey wool. We also took the advice and lubed up the balloon (which is a new experience). 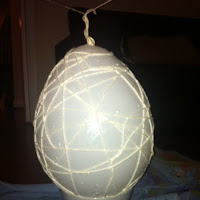 Cut lengths of the wool and dip in to the glue. In hind sight, I would have ensured that we'd stripped off more of the excess glue, than we did, when pulling the wool out of the mixture and placing on the balloon.
We also ensured that there was at least three inches round, clear at the top of the balloon, as we have a wide fitting on our sitting room light fixture.
We experienced some issues with getting the wool under the balloon to stick, stupid gravity. But we found the more we added, under and over, the easier it was to hold it in place. We also, purposefully tucked the ends and beginnings under, or next too, other lines.

Add as little or as much as you'd like, it's a personal choice. Leave until dry. We had to restring the suspension, as it was touching the ground by the end. They suggest you leave it for 24 hours, but our balloon popped after 17 hours, which was eventful! 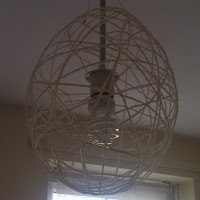 They also suggest you spray paint it afterwards (I was going to glitter spray it but decided to leave it neutral/nature), but I was thinking that different coloured wools would be quite fun. Rainbow lampshades any one?

I used some thin wire and suspended it from the fitting. It's not great, but as a first attempt, I was relatively pleased (what can I say, I'm a tough crowd). 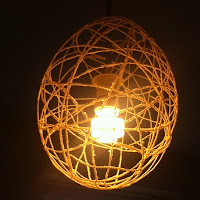