I was in need of some cheap decorations, due to all of mine being in Oxfordshire, at my parents, and being skint. While on lunch the other day, I started to fret where to get some baubles, etc., everywhere on Oxford St is extremely expensive, where are all of the Wilkos of London?! I miss Wilkos!


I then hit upon an in genius idea, Primark! Although, Primark on Oxford St is a huge nightmare, possibly worse than New Years Sales, which are also something I avoid. I bit the bullet and took one for the team. 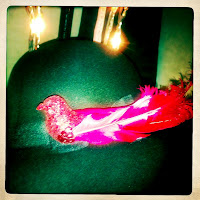 Now in Primarks defence, their decorations are relatively a-ok! I fell in love with these horrifically tacky glitter birds (this photo doesn't do them justice)! They come in various colours. They are totally worth the €3 (I can't find the receipt, so I've no idea how much they are in pounds, but I'm assuming £2.50-3).


Anyhow, I purchased some "Shatterproof baubles" = plastic! And these birds, they come in packets of three, and three different sets of colours. That night, I marked circles on to some pizza boxes, cut them out, marked some smaller circles on the inside. Glued the two sides together, covered them in foil, heated up my glue gun and got to work.

I took the tops off each of the baubles. and worked out how many I would need on the outside circle, and then on the inside circle. Tried to sort a general pattern, so that there wouldn't be lot of the same ones together, and set about gluing them in place.  I then glued a string of beads in and around them, to disguise the foil.  Well, in an attempt to disguise it. 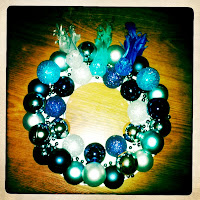 Once that was all dry, I glued the remaining baubles on top of the bottom baubles, to hide the bauble tops. I left that to dry for a hour. Then I glued the birds in place, as a crowing glory.

The next day, once all was dry and set, I hooked some wire in place between the birds. So it's easy to hang.

It won't last forever, the glue in my gun is a little rubbish, but it'll last this Christmas, and everything involve, is easy to dismantle and reuse next year. This Christmas might be a cheap one, but it's going to be so so pretty!