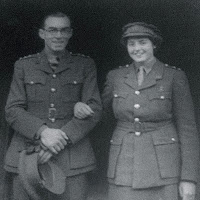 Today is the Queen's (my Grandma) 88th birthday. In homage to the old girl, I'm dedicating this post to her!

To the left is a photo of her and my Grandpa on their wedding day, many, many moons ago. Can you tell it was during the war? He was also, 13 years her senior, dirty old dog! Apparently there is a photo of my grandpa in the Imperial War Museum (in the 2nd World War section in the basement) sitting on a doogle-bug, that he and his battalion discovered in a woods in Germany, my grandma donated it to the museum, after he passed away, so others could enjoy it. I went there last summer and didn't see it, as I didn't know it was there. I'm going back, soon!

My grandma is a bit of a marvel. Fiercely independent, and stubborn as the most impossible mule. She often jokes that god is keeping her on the earth, as a joke. A bit harsh but very funny. It's safe to say that she's always had a very dry sense of humour. She's extremely witty and dark humoured, even at her age, possibly more so, now. And sharp with it.
She grew up on the outskirts of London, within a well to do family. One great uncle started the first department store in London and another was a Whittard. Her mother was of German descent, her father English.
During the war, she was based down in Cornwall for a while, training young troops how to man the spotlights, later she got moved to central England to work on the radars. She once told me that the saddest part of the job was counting back in less planes, than had gone out. Towards the end of the war, she fell pregnant with my dad and lived out the last year or so, with offspring, assisting the army where she could.
After the war, once my grandpa returned from Germany. They settled in Blackheath. Apparently, she had the greatest garden of south England and the greatest dog know to man. Since then, she's moved around a bit. Worked way passed her retirement years and had my family running around her, like mentalists. So, I'd like to raise my glass of squash in honour of the old girl's 89th year, chin chin!
Posted by Pipsywoo at 10:16 PM