I joined NakedWines about a year ago. I received £40 off my first order through BBCGoodFood, when I signed up with them, (which as a side note, is totally worth it, as not only do you get £40, you also get somewhere online to store your favourite recipes and also somewhere to submit them).

I'm not one to turn down a good offer, so off I went to NakedWines. The first thing I liked was that they support winemakers, who have found it hard to get distribution within the UK. Second, they deliver to your door (I know all wine companies do this, but it's a huge plus). Third, the website is perfectly interactive, where members can leave reviews and opinions of particular wines. Basically, there are lots of reasons I like them and chose to stick with them. I originally thought, if it's crap, I can leave, but it wasn't crap, it was great. Especially as this bottle, Minervois, was one of my first purchases. 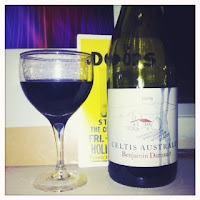 Now, Benjamin Darnault is a genius with wine. Some how whatever he discovers/makes tastes like heaven. Tom & I adore the Minervois, ever since we had it the first time, the heavenly silky, cameral rouge has now become a standard order for us. I'm soon to order the Benjamin Darnault case, to taste all of his delightful discoveries.

This month, I got in the Celtis Australis, it's just as gluggable as the Minervois, a little fuller, but equally as rounded. Basically, if you're going to spend money anywhere, and would like a tasty wine and some thing that is purely delicious, order Ben's wines from Naked Wines, if nothing more...
Posted by Pipsywoo at 8:27 PM