It's Halloween tomorrow!!! I'm a fan of dressing up. I got a little peed off with doing so for a year or two but I'm back in to loving it now! I've been failing with organisation but always seem to be able to pull last minute outfits off.

In the past at Halloween I've been:
A zombie Dorothy from The Wizard of Oz,
an 80's prom attendee,
Half man/half woman,
Wonder Woman,
one of the Fame kids,
Amy Winehouse,
and a slitted throat corpse. 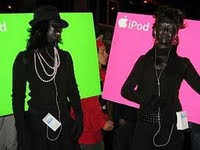 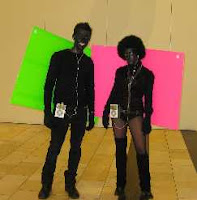 I saw this great set of costumes recently online. It wasn't these photos but another, which was done a little better. Anyhow, I thought it would be pretty easy to do. Although being covered head to toe in black is appealing, walking around with a board on my back, isn't so much. I think I'm now going to attend as an American geek/nerd. I just need some braces and a pocket protector!
Photos will follow.
Posted by Pipsywoo at 3:13 PM