I've had some issues of late with my darling herbs.

Firstly, the Mint got mouldy, it was gross, white moss and black speaks grew all over the leaves, it was horrid. I tried to treat it with Baking Powder, alas, it failed, so had to cut it right back to the roots. Sad, sad times. It seems to be recovering well, small growth, but growth. Can't wait for it to get back to full health, I keep on coming across recipes with Mint, sigh and then substitute, and funnily enough Chives don't replace Mint well.

The Coriander has recovered, finally. Took repotting in a larger pot and lots of fresh air and water. It's even started to flower, which is a little too exciting for me, after seeing it suffer for so long. But it has now spread it's sap everywhere, but I guess it's all part of the growing. 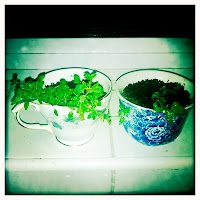 The two tea cups have started to sprout now. Still no idea which is which, but?! They are looking healthy, although the Coriander has dropped sap on one of them (so it looks horrid), but it'll cope, poor little thing. My mum visited, our flat, the other day and started trying to rub the teeny tiny leaves to identify which was which, isn't she adorable. 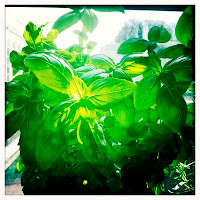 The success story is the Basil, it's kicking arse (well since the Mint fiasco happened), absolutely incredible. The leaves are huge and tasty. We made some amazing Basil Oil with them, which we'll be doing for Christmas presents too. Might have to start freezing it though, so it doesn't waste away.
I'm still enjoying it so much! If only my window sill was bigger.

Update (1st Sept): The Coriander contracted greenfly, very upsetting after the new spurt of growth, etc. Decided to throw out and start from scratch. Poor thing.
Plus, due to sun rotation, the two small cups died also, bad weather, etc all resulted in total failure. Stupid work and not being at home to make everything perfectly well watered and sunned. Here's to the rest of them! Fingers crossed!
Posted by Pipsywoo at 11:48 PM